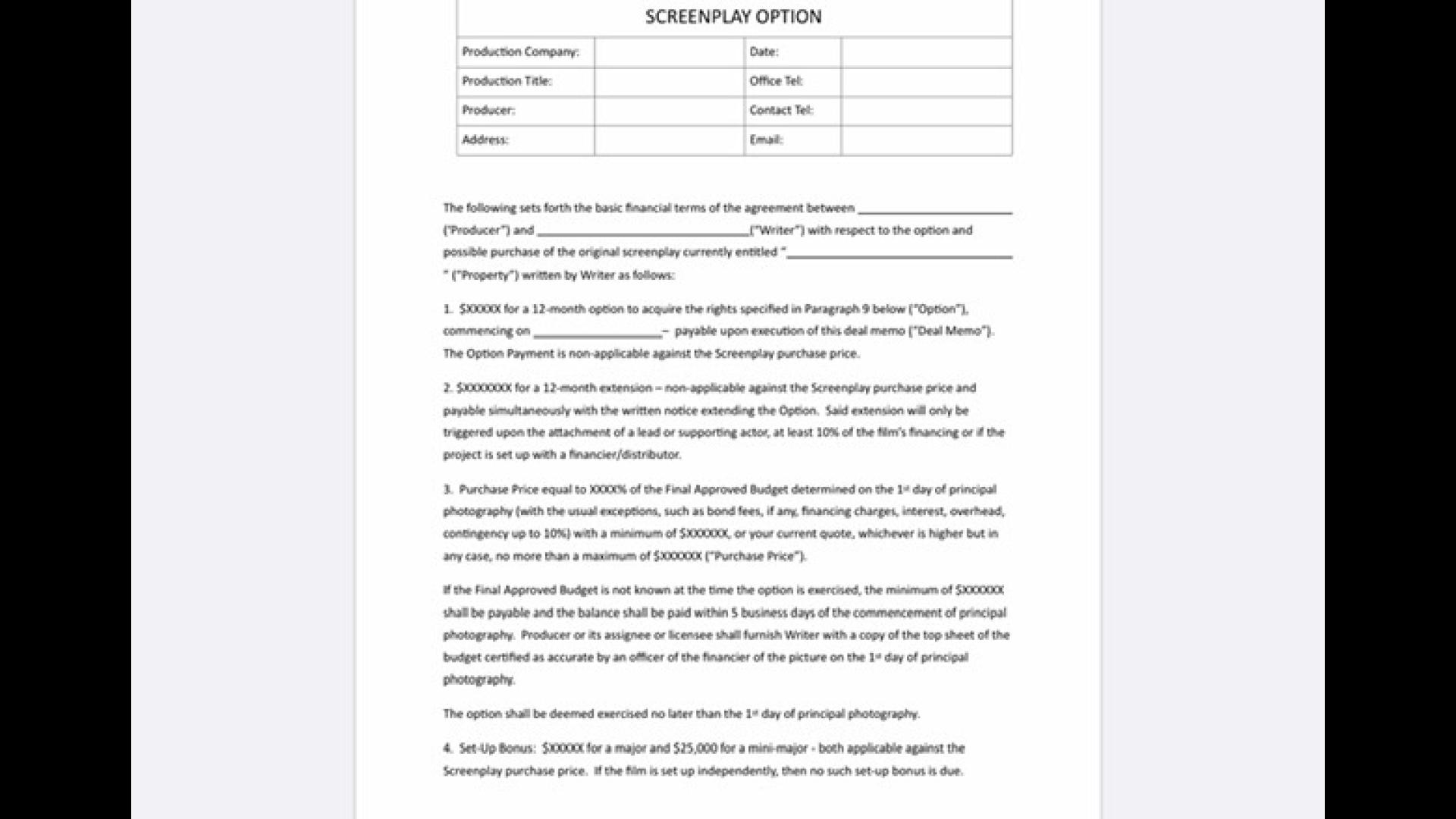 Here is what every writer should know about the ins and outs of Option Agreements and how to make the most out of optioning a screenplay.

This Screenplay Option Agreement template is a contract that allows a producer or a studio to obtain the film rights to a writer's screenplay for a period of time with the goal of making it into a film.

There are three main elements of an Option Agreement that a writer should be aware of. By Jonathan Treisman

The Option Agreement will stipulate the amount of money that the writer will receive for allowing the producer or Studio the privilege of utilizing his or her screenplay for development purposes. This is called the "Option Payment."

The Option Payment could be for one dollar, hundreds of dollars or tens of thousands of dollars. Once again, if the producer or studio wants to extend the Option, the writer will receive another Option Payment.

So, how much money can a writer expect to receive from an Option Payment? The amount of an Option Payment can vary greatly. It is really a negotiation process based on many factors including the writer's track record in the industry and the potential budget of the film.

Producers will ask themselves a series of questions such as: Is this the writer's first screenplay or has the writer sold several screenplays to the studios before? What would a fair Option Payment be if the budget of the film were $1 million versus $50 million? How much can we realistically afford to pay the writer?

Some industry insiders say as a rule of thumb that an Option Payment is usually equivalent to 10% of the Purchase Price, but these amounts are always negotiable and writers need to be careful not to get taken advantage of. That's why all writers need to have good representation in the form of a literary agent or an entertainment attorney. Writers should never negotiate contract terms on their own.

The third element is the amount of money that the writer will receive from the producer or studio in the event the project is made into a feature film. This is called the "Purchase Price." Is it $50,000, $100,000, or more?

Sometimes the Purchase Price will be calculated on a sliding scale as a percentage of the budget, so as the budget of the film grows, so will the Purchase Price. All of these figures can vary greatly but everything is negotiated up front in the Agreement so that all parties are on the same page.

Option Agreements can be a win-win situation for both the writer and the producer. The writer is paid to lease his or her screenplays for a limited period of time while the producer attempts to get the project greenlighted. If it happens, then great.

The writer will receive a nice Purchase Price for all the hard work. If it doesn't happen during the option period, then the writer keeps the Option Payment and all rights to the screenplay revert back. The writer could then decide to option the script again to another producer.

From the producer's perspective, an Option Agreement gives him or her an opportunity to hold on to a screenplay exclusively for a period of time without having to lay out a lot of money up front while trying to get the project off the ground. If the producer can't get the film made, all rights to the screenplay revert back to the writer, then at least, the producer worked hard but didn't go bankrupt in the process.

So when the phone rings tomorrow and someone wants to option your screenplay, it's okay to get excited, because now you will know what to do.

Just download the Scriptwriter Contract Template as an example of what to expect.